A regular desk with a drawer seems just plain drab compared to the uber-cool OLLLY desk! Not only handsome, it’s also designed to accommodate all your modern devices and not-so-modern apparatuses.

Aside from a pull-out drawer at its center, it also features grooves on either side to hold and keep your pens, pencils, stylus or other writing utensils from rolling around. It also has openings dedicated to propping up your tablet, phone or other slim techs for easy viewing that takes up less desk top real estate than laying them down flat. In a sleek ebony and oak combination, it’s a chic and functional office option you can get here! In this story by Rafael Zoehler, a father who dies at 27 wrote his son a series of letters to be opened at several of life's milestones, including WHEN YOU HAVE YOUR FIRST KISS, WHEN YOU BECOME A FATHER, and WHEN YOUR MOTHER IS GONE. This letter was entitled "WHEN I'M GONE":

If you're reading this, I'm dead. I'm sorry. I knew I was going to die.

I didn't want to tell you what was going to happen, I didn't want to see you crying. Well, it looks like I've made it. I think that a man who's about to die has the right to act a little bit selfish.

Well, as you can see, I still have a lot to teach you. After all, you don't know crap about anything. So I wrote these letters for you. You must not open them before the right moment, OK? This is our deal.

I love you. Take care of your mom. You're the man of the house now.

PS: I didn't write letters to your mom. She's got my car.

cinebot
reply
so many tears.
toronto.

When Tim Urban recently began researching artificial intelligence, what he discovered affected him so much that he wrote a deep two-part dive on The AI Revolution: The Road to Superintelligence and Our Immortality or Extinction.

An AI system at a certain level -- let's say human village idiot -- is programmed with the goal of improving its own intelligence. Once it does, it's smarter -- maybe at this point it's at Einstein's level -- so now when it works to improve its intelligence, with an Einstein-level intellect, it has an easier time and it can make bigger leaps. These leaps make it much smarter than any human, allowing it to make even bigger leaps. As the leaps grow larger and happen more rapidly, the AGI soars upwards in intelligence and soon reaches the superintelligent level of an ASI system. This is called an Intelligence Explosion, and it's the ultimate example of The Law of Accelerating Returns.

There is some debate about how soon AI will reach human-level general intelligence -- the median year on a survey of hundreds of scientists about when they believed we'd be more likely than not to have reached AGI was 2040 -- that's only 25 years from now, which doesn't sound that huge until you consider that many of the thinkers in this field think it's likely that the progression from AGI to ASI happens very quickly. Like -- this could happen:

It takes decades for the first AI system to reach low-level general intelligence, but it finally happens. A computer is able understand the world around it as well as a human four-year-old. Suddenly, within an hour of hitting that milestone, the system pumps out the grand theory of physics that unifies general relativity and quantum mechanics, something no human has been able to definitively do. 90 minutes after that, the AI has become an ASI, 170,000 times more intelligent than a human.

Superintelligence of that magnitude is not something we can remotely grasp, any more than a bumblebee can wrap its head around Keynesian Economics. In our world, smart means a 130 IQ and stupid means an 85 IQ -- we don't have a word for an IQ of 12,952.

While I was reading this, I kept thinking about two other posts Urban wrote: The Fermi Paradox (in that human-built AI could be humanity's own Great Filter) and From 1,000,000 to Graham's Number (how the process of the speed and intelligence of computers could fold in on itself to get unimaginably fast and powerful). 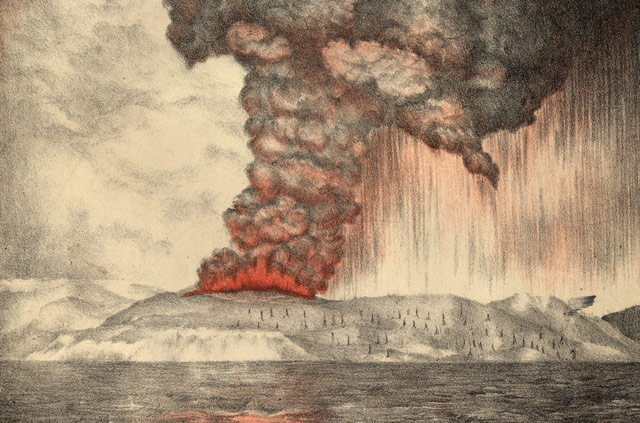 The sound made by the Krakatoa volcanic eruption in 1883 was so loud it ruptured eardrums of people 40 miles away, travelled around the world four times, and was clearly heard 3,000 miles away.

Think, for a moment, just how crazy this is. If you're in Boston and someone tells you that they heard a sound coming from New York City, you're probably going to give them a funny look. But Boston is a mere 200 miles from New York. What we're talking about here is like being in Boston and clearly hearing a noise coming from Dublin, Ireland. Travelling at the speed of sound (766 miles or 1,233 kilometers per hour), it takes a noise about 4 hours to cover that distance. This is the most distant sound that has ever been heard in recorded history.

A much much smaller eruption occurred recently in Papua New Guinea. From the video, you can get a tiny sense of the sonic damage unleashed by Krakatoa:

Holy smoking Toledos indeed. On Reddit, a user details how loud a Saturn V rocket is and what the effects would be at different distances. At very close range, the sound from the Saturn V measures an incredible 220 db, loud enough to melt concrete just from the sound.

At 500 meters, 155 db you would experience painful, violent shaking in your entire body, you would feel compressed, as though deep underwater. Your vision would blur, breathing would be very difficult, your eardrums are obviously a lost cause, even with advanced active noise cancelling protection you could experience permanent damage. This is the sort of sound level aircraft mechanics sometimes experience for short periods of time. Almost twice as "loud" as putting your ear up to the exhaust of a formula 1 car. The air temperature would drop significantly, perhaps 10-25 degrees F, becoming suddenly cold because of the air being so violently stretched and moved.

Even at three miles away, the sound is loud enough to cause permanent hearing damage. But that's nothing compared to the Krakatoa sound. The Saturn V sound is ~170 db at 100 meters away while the Krakatoa explosion was that loud 100 miles away! What happens at 170 db?

...you would be unable to breathe or likely see at all from the sound pressure, glass would shatter, fog would be generated as the water in the air dropped out of suspension in the pressure waves, your house at this distance would have a roughly 50% chance of being torn apart from sound pressure alone. Military stun grenades reach this volume for a split second... if they are placed up to your face. Survival chance from sound alone, minimal, you would certainly experience permanent deafness but probably also organ damage.

The word "loud" is inadequate to describe how loud that is. (thx, david)

esch
reply
I had no idea sound was this powerful.
Minneapolis, Minnesota

Forget about face melting. Concrete melting is the new goal when rocking out.
San Francisco, CA

jhamill
reply
TIL you can melt concrete with sound.
California

dreadhead
So I guess that is turning things to 12?

Shopping in a supermarket can be visually overwhelming. Designer Mehmet Gozetlik took the packaging of some well-known brands and simplified them (part two). It's interesting how some of these work and some don't. Duracell works really well because the batteries themselves still carry most of the branding:

The simplified branding of Guinness and Evian works pretty well too...the packaging is itself iconic and distinctive enough to carry them. The Pringles and Red Bull are missing something, but in almost all cases, I like one of the simplified options more than the original. (via @dunstan)

Fahad_Naqvi
reply
Quotes from the past
Sharjah, United Arab Emirates

Alt text="Some future reader, who may see the term, without knowing the history of it, may imagine that it had reference to some antiquated bridge of the immortal Poet, thrown across the silver Avon, to facilitate his escape after some marauding excursion in a neighbouring park; and in some Gentleman's Magazine of the next century, it is not impossible, but that future antiquaries may occupy page after page in discussing so interesting a matter. We think it right, therefore, to put it on record in the Oriental Herald that the 'Shakesperian Rope Bridges' are of much less classic origin; that Mr Colin Shakespear, who, besides his dignity as Postmaster, now signs himself 'Superintendent General of Shakesperian Rope Bridges', is a person of much less genius than the Bard of Avon. --The Oriental Herald, 1825"
Yonkers, NY
Next Page of Stories